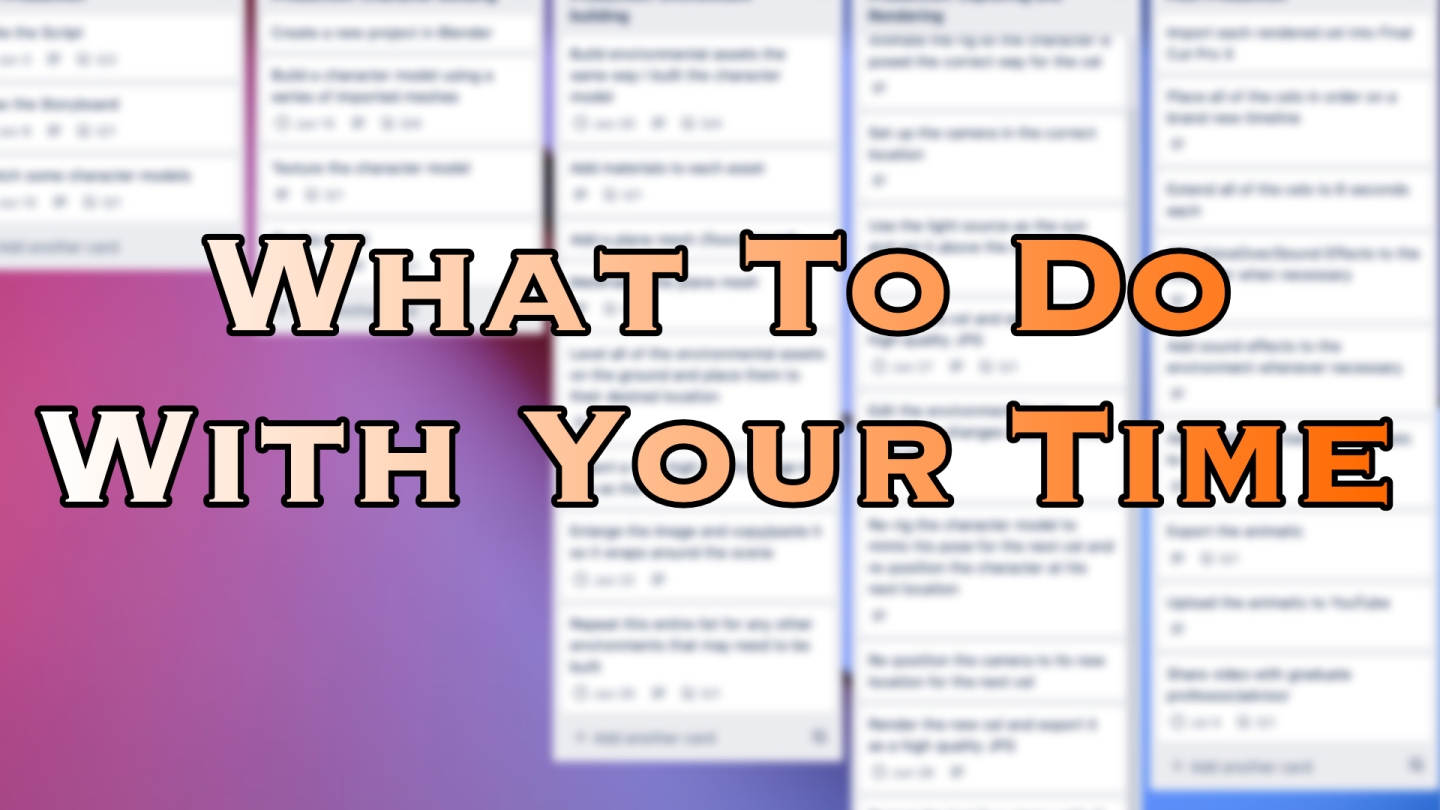 Is anyone in the same boat as I am? Have you decided to undergo a major project and the major obstacle stopping you from going further is the fact that you’ve never worked with this tool or this software before?

Well that is exactly the boat that I am in.

If you read last week’s post, you know that I have decided to challenge myself and create an animatic through Blender, an open source software application that focuses on the one medium of filmmaking that I have never messed with: 3D computer animation.

Throughout the week, there have been times where I have questioned my logic and reasoning for going with this project idea. Do I know what I’m getting myself into? Can I really pull this off in seven weeks? I know failure is an option, but will my grade suffer if I fail to make my project worthy enough to go into my portfolio? Should I have gone a more simple route and made an AR film instead?

All of these questions surfaced my head, and sometimes they still do. Ultimately, I have decided that I need to stick with this project, I want to make this, and I’m going to submit this project no matter how badly it may turn out.

Of course, that is not the plan. I would much rather make this project as best as it can possibly be and create something that CAN go into my portfolio. But how do I pull this off?

By creating a project plan, of course!

I spent the last few days creating a project definition and a project breakdown board. Both of these assignments have helped me figure out some of the best practices for getting ready to manage my time when I start my project. While creating my project definition, I was able to think about which pieces of my project would be possible to complete in time (considered “in scope”) and which factors of a standard 3D animation I would not be able to complete in time (considered “out of scope”). I was able to take the basic ideas that were listed under “in scope” and flesh them out more broadly while creating the project breakdown board.

Now, here are my top three tips for how to manage your time on a project that you have no idea what you’re doing (yet):

Project management/breakdown boards are available everywhere. Trello is an easy one to use: you create lists for larger milestones in your project process and make cards within said list to track each individual step in that process. Once you write these steps on a board like this, you will be more likely to get going on it because you took the time to write down the project.

2. Give yourself a whole lot more time than you think you need.

When it comes to creating a 3D animatic despite never touching a 3D modelling software in my life, I’ve realized I’m going to need a lot more time to do some of the basic things that would take seasoned animators an instant to accomplish. Everything is going to take longer, from writing the script (which requires eight times as many words for animation scripts than live-action ones), to building a character model, to rigging it, to building the environment, among many other key aspects of animation. For example, I gave myself two full days to work on modelling the character alone – not texturing it, not rigging it, solely modelling it. Seasoned animators can get a simple character modelled in just a few hours, meanwhile if a newcomer like me can finish modelling my character earlier than expected, I will be in good shape for the next steps.

3. Read and watch LOTS of tutorials.

I understand that the act of watching a tutorial does not directly contribute to time management, but if you have absolutely no idea what you are doing when you open a brand new software, how are you going to manage your time well…if you have no idea what you’re doing??

Watching tutorials is such a good idea. It will get you more familiar with the software and force you to understand its UI and functions without you needing to figure it out on your own. As I embed myself within Blender’s community, I am finding that any piece of tutorial is helpful, whether it’s how to start making a real-world object, how to render large scenes, how to model a character in 3D, how to rig a character, how to texture paint a character, or even simply what to do with the default cube as soon as you open Blender.

There are so many tutorials out there that you can find yourself familiar with the software you wish to learn before you even open it for the first time!

Attached is my revised project proposal, to get a better idea of what I intend to work on over the next six weeks.